FAMOUS CHEFS FROM INDIA IN CULINARY 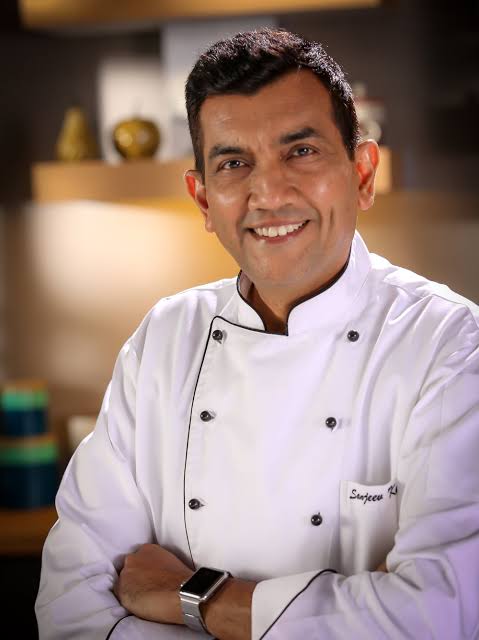 Sanjeev Kapoor is one of the most renowned and appreciated faces & a  favorite amongst the top 10 chefs of India. He has made for him & India a great name in Indian food. He is a professional Chef, working for a very famous Channel ‘FoodFood‘. Sanjeev Kapoor is also the writer of top chef books, owner of restaurants which are very famous, and has won many food competitions during his still continuing long career. He is working with the dream of making Indian fo was the most obvious around the world by his ways & style of cooking Indian food. Besides this Sanjeev Kapoor is also acknowledged as the ‘Best Chef of India’. This award has been conferred upon him by the Government of India. As per an estimate, the total accumulated Wealth / net worth of more than $140 million / 1000 Crores in INR  and has become a brand of his own & owns around 65 outlets/restaurants under different Brand names.

A Michelin star Chef and known for winning competitions and undoubtedly the second most popular Chef in India, Chef  Vikas Khanna has made his name a brand & a regular household name. He is considered a very humble & kind chef in the culinary world. He began his career from his grandma’s kitchen in Amritsar & today the Chef Khanna has worked with a lot of the best food experts around the world, including Gordon Ramsey, and Bobby Flay. Moreover, he also runs his own restaurant in New York which he runs under the name “Junoon”.  Khanna’s has additionally arranged a dinner for US President Barack Obama. In 2011, he was also conferred upon the honor of being the ‘Sexiest Man Alive’ by People’s Magazine. Besides this Chef, Khanna has a net worth of $75 million & makes more than 2800 US $ per day which is a huge amount.

Cooking specialist Ranveer Brar has made his mark in no time as one of the youngest chefs amongst the top 10 chefs in India. He was an official culinary expert at 25 years old who has ever worked with a five-star property in India. At present, he is also working as a senior official culinary expert at the Novotel Hotel in  Mumbai, Juhu Beach. He is also supervising the Dosa Factory and Shalimar in Cambridge in addition to Mantra in Boston, which are very famous restaurants/outlets under his command. He also runs a very famous show  ‘Health Bhi Taste Bhi’ on Zee Khana Khazana in which he represents unique and easy styles of cooking.

Chef Harpal Singh Sokhi has made his mark and name by Combination Cooking in which he has tried & explored new tastes by a combination of International & Indian food which has made him famous as the top best ten Indian chefs. He has a big name in the Indian Food business. With a basic foundation from North India, Chef Harpal is also a very vivid music lover and is familiar with English and five Indian regional languages – Hindi, Punjabi, Bengali, Oriya, and Telugu. He has also made a great amount of money & is having a net worth of $2 million or more to his fortune.

Born and brought up in a Punjabi Family, from a very early age, Kunal Kapur took a liking for cooking and pursued it to become one of the most well-known chefs in India. He trains underprivileged & unemployed youth in cooking and helps raise funds to make their own sustained food business together with United Ways Delhi. He is also passionate about automobiles, technology, travel.

A very famous name amongst the households and Indian public  Kunal Kapur has hosted many MasterChef Television Shows both Indian & Multicultural. He has judged & hosted very famous Master Chef India season 1, Season 2, Season 3 & Season 5. Also has hosted a very popular series for 4 seasons on NDTV Good times by name of  My Yellow Table. He has also been associated with a well-known brand Tupperware, has recently also launched two of his own products.

Kunal Kapur has another feather in his hat as Kapur is in the league of Elite Star Chefs in German Airlines Lufthansa, where he has customized menus for first and business-class passengers.

It is the passion for food & cooking that has lead to such massive success in this field for these Chefs and many more people in the Culinary/Cooking or in the Hotel Management Industry. The industry offers a great variety of opportunities & success if one is ready to use their own ideas & put into action in food preparation along with the right basics in the basic cooking skills.

1 thought on “FAMOUS CHEFS FROM INDIA IN CULINARY”